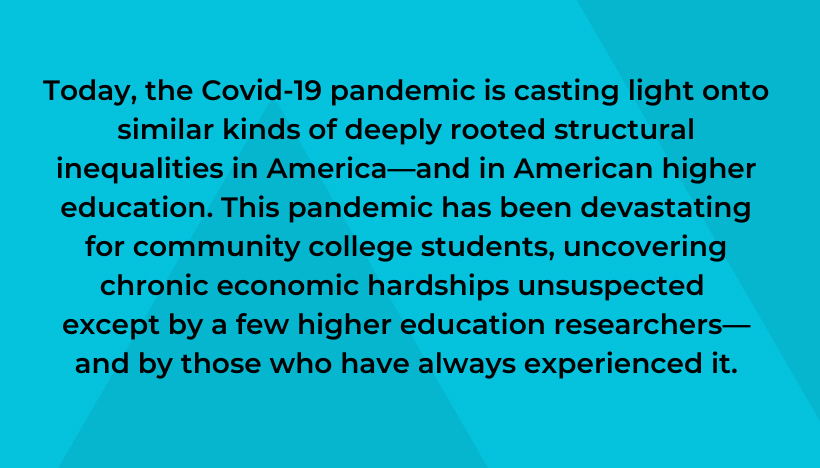 This post was contributed by NCTE/TYCA members Patrick Sullivan and Howard Tinberg.

Picture this: a student whose first language is not English wants help on an paper that she is writing for her first-year composition course. She logs onto her college’s online, synchronous writing center and is met by a tutor. The session begins. In the background can be heard several conversations. The student’s siblings, one of whom is in kindergarten, are all engaged in remote learning at the same time. There are no rooms or offices to which to escape and find privacy. The session continues with the strains of English and Spanish in the background.

Such a scene is hardly unique during the pandemic. But it does remind us that the impact of the pandemic is felt in disparate ways by students. Some students have the space and resources to accommodate remote learning better than others. This much we know: the pandemic has exposed the inequities in our schooling system—from pre-K to graduate school. Enrollment at public colleges has declined precipitously due to the pandemic, as families who have lost vital sources of income scramble to support themselves. Public community colleges have been especially hard hit with enrollment down significantly this past fall and a short fall expected in the spring.

With this in mind, we share our essay “The Covid-19 Pandemic and Structural Inequalities in American Higher Education,” which is reprinted with permission from the blog of the American Association of Colleges and Universities (October 29, 2020).

In Freedom from Fear: The American People in Depression and War, 1920–1945, historian David M. Kennedy tells the story of an extraordinary research project undertaken in 1933 during one of the most painful, frightening years in American history.

The director of the government’s Federal Emergency Relief Administration, Harry Hopkins, was seeking a way to understand the lived experience of the Great Depression. The economic numbers were staggering. One out of every four Americans was unemployed. Thousands of Americans had been evicted from their homes. Many were forced to turn to soup kitchens for daily sustenance.

Hopkins assigned Lorena Hickok, an acclaimed journalist and a close friend of Eleanor Roosevelt, a simple task: drive out into America to see how people were doing.

“I don’t want statistics from you,” Hopkins explained. “I don’t want the social-worker angle. I just want your own reaction, as an ordinary citizen. And when you talk with them don’t ever forget that but for the grace of God, you, I, any of our friends might be in their shoes.”

What Hickok found was “old poverty”—largely invisible privation and suffering experienced by millions of Americans that the Depression had suddenly cast into light.

“The researches we have made into standards of living of the American family have uncovered for the public gaze a volume of chronic poverty, unsuspected except by a few students and by those who have always experienced it,” Hopkins said.

The Depression, Kennedy writes, “was not just a passing crisis but an episode that revealed deeply rooted structural inequalities in American society.” This was among the most important—and the most heartbreaking—discoveries during this dark time in our history. It has continued to drive public policy ever since.

Today, the Covid-19 pandemic is casting light onto similar kinds of deeply rooted structural inequalities in America—and in American higher education. This pandemic has been devastating for community college students, uncovering chronic economic hardships unsuspected except by a few higher education researchers—and by those who have always experienced it.

This situation should not be surprising given the status of community colleges as “honored but invisible“—”honored” for their work in promoting the success of nontraditional, often unprivileged students but “invisible” to a public that so often wishes to divert its resources and attention elsewhere.

Students who attend community colleges have historically been among the nation’s most financially vulnerable college students. Remote learning and sheltering in place are, unfortunately, very different experiences for students who depend on libraries, computer labs, internet connectivity, and other on-campus services like food pantries, counseling, and financial aid.

At Bristol Community College and Manchester Community College, we have learned these hard truths personally as our students have communicated with us via email, phone conversations, and Blackboard postings about missed assignments, loss of income and jobs, lack of health care coverage, and sick family members. Even though we are both long-time community college faculty, we have been shocked by what we have seen—and deeply alarmed at the level of disruption the pandemic has caused in so many of our students’ lives. Comments from our students, excerpted below, give a sense of what community college students are saying, feeling, and experiencing:

An Unprecedented Period of Pain

To say this is an unprecedented period of pain is an understatement. I would not be writing this response at 3:26 a.m. otherwise. This virus discriminates against the most economically and socially disadvantaged (or what we now call “essential workers”) and it’s scary to think that a community like MCC, in which the disadvantaged fight for a better life in a broken system, will likely get hit hard. I’m glad professors are being flexible and recognizing an increased need for leniency in this time. My mom, who I live with, is an essential worker at a nursing home with confirmed cases. It feels like only a matter of time before I’m exposed. I share in your anxiety and wish you all and your families luck and strength in facing the deadliest pandemic in living memory, and depending on your age, your second, third, or fourth major global economic recession.

No Idea What to Do about This Madness

I’ve been having a really rough week, and my internet is down, [the] reason why I haven’t uploaded my TED Talk. Also the library is closed due to this madness; I have no idea what to do about this.

A Lot More Stressful and Confusing

I’m really far behind and I don‘t know if I will be able to catch up. I‘m having a more difficult time doing this from home with not having anyone able to watch my kids and not being able to go to the writing center for extra help. Since class shifted from class to online it has been a lot more stressful and confusing. I have a hard time learning and understanding things at first, so I usually need it explained in a few different ways or just heard over a few times, before I fully understand the concept. Now that everything is online, it’s hard to concentrate and hear because of either bad [internet] connection or my kids needing my attention due to the fact I don’t have anyone to watch them like I did before. I also used to go to the writing center for extra help and even though it’s still online it’s much more difficult because I learn better in person.

In light of these responses from our students, we wish to make three points about the state of community colleges and their students. First, enrollment is dropping at community colleges nationwide because the pandemic has caused income reduction, job loss, and disruption of daily schedules and responsibilities. It has made life difficult in a variety of new ways for many families and individuals whose lives were already precarious.

To provide one example, we have found that the “digital divide” is no fiction for many community college students. At one of our colleges, the move to remote teaching brought with it the realization that, for many students, there were simply no computers to be had at home—whether desktops, laptops, or tablets. We had to purchase nearly two hundred Chromebooks for immediate use by students—hardware that was barely sufficient to meet the demands of remote teaching and learning.

Second, just as the Great Depression spurred America to take action against chronic poverty and privation, we invite legislators and community leaders to use this moment to address the economic precariousness that affects the academic lives of so many community college students.

Open admissions is one important step higher education has taken to democratize education in America. The next step is to make this promise real for a larger number of students. This will require substantial work: addressing food insecurity, housing insecurity, child care, health insurance, advising needs, precarious employment conditions, racism, economic inequality, and other issues.

Academic success in college requires much more than an open door. Given what we know about the great value of college education for individuals, neighborhoods, the nation, and democracy, this is an ideal time to renew our commitment to community colleges and reinvest in these institutions—rather than continue to defund them. When we strengthen community colleges, we build social capital, promote upward mobility and intergenerational mobility, and strengthen our democracy.

Finally, we would like readers to understand that community colleges are social justice institutions—not just convenient, affordable alternatives to four-year colleges. Community colleges are actively engaged in the unglamorous, street-level work of translating American ideals about civil rights, social justice, and equal opportunity into a lived reality for millions of students nationwide.

We urge you to support them.