A Timely Conversation with Khaled Hosseini - NCTE
Back to Blog 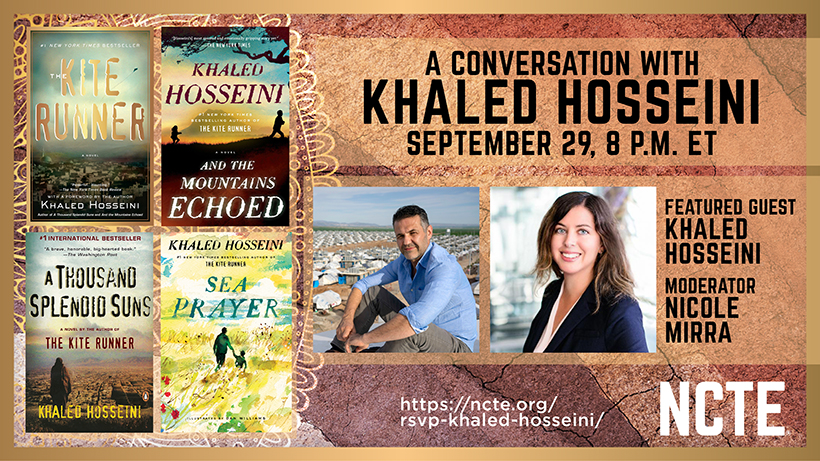 “This is a call to humanity.”—Malala Yousafzai

Over the past few weeks, the world has witnessed the ousting of the Afghan government and the rapid fall of each province and city to the Taliban. Tens of thousands have fled the country, many more desperate to do the same, while each day, escape seems less likely. We are bearing witness to a humanitarian catastrophe, as an entire generation of Afghans face an unknown future and a past that haunts their older generations.

Even prior to the drastically escalating events that have unfolded this summer, the state of education and literacy for Afghan children was bleak. In a country of just under 40 million people, as estimated by the United Nations, a staggering 3.7 million school-age children were already out-of-school. Sixty percent of those students missing from classrooms are girls.

Now, the future of education, particularly for women and girls in Afghanistan, is as perilous as it’s been in decades. Before the president of the country’s only girls’ boarding school evacuated with many of her students, she burned the girls’ records “not to erase them, but to protect them and their families.”

On Wednesday, September 29th, at 8:00 p.m. ET, NCTE will host A Conversation with Khaled Hosseini. The author of beloved, and often challenged, works that are published in 70 countries and have sold more than 40 million copies, Hosseini will join NCTE in conversation as we process the current tragedy together and think about application in the context of literacy education.

Hosseini’s New York Times bestsellers The Kite Runner, A Thousand Splendid Suns, and And the Mountains Echoed are favorites among students and teachers alike and have even heightened relevance in this academic year. In addition to his career as an author, Hosseini is a medical doctor and humanitarian. Hosseini is also a US Goodwill Envoy to the UNHCR, the UN Refugee Agency, and the founder of The Khaled Hosseini Foundation, a nonprofit that provides humanitarian assistance to the people of Afghanistan. Having been granted political asylum with his family as a teenager, this son of a history teacher is uniquely situated to discuss the educational and humanitarian crises that grip the Afghan people.

RSVP for this event.