Build Your Stack: Middle Grade Fantasy Books Recommended by Ainara - National Council of Teachers of English
Back to Blog 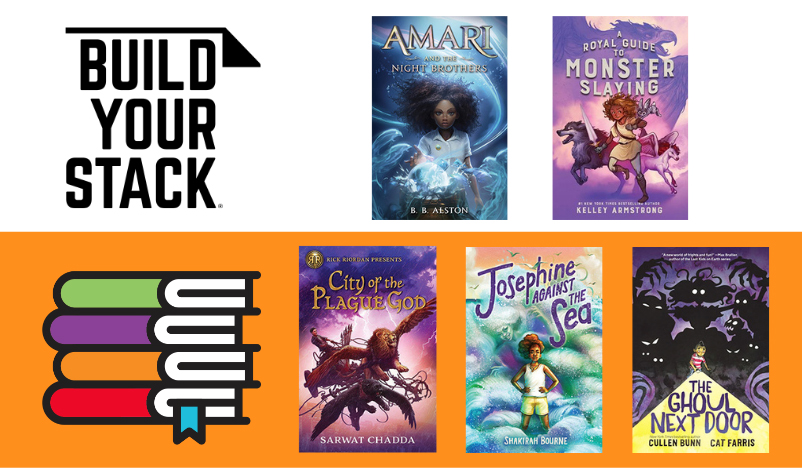 Hey! My name is Ainara from @ainarasbookshelf on Instagram and I’m 12 years old.

Middle grade is definitely my go-to genre because most of the characters are the same age as me. During the pandemic I have been reading a lot more middle grade fantasy books and it has been so fun! Because we have to stay at home and we can’t explore our world that much, it has been so great to dive into a book and escape into another world entirely. Using my imagination and being able to fully enter a new place with new possibilities is so helpful during this time and I think everyone should experience these kinds of books.

Don’t get me wrong, fantasy books have always been fun. When we were still in physical school before the pandemic hit, I had a teacher who would read two chapters of a fantasy book each day to the class. We read more than one that year but I especially remember reading Charlie and the Chocolate Factory. The excitement in the class sparked lots of conversation and helped get our minds ready for the day in a fun way. When we go back to school I think that these fantasy books will help the students and the classroom environment so much. 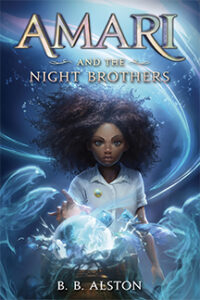 Amari and the Night Brothers by B. B Alston is definitely one of my favorite books, and not just in the fantasy genre. All the magic and world-building make this book feel more like an experience. I got so attached to the characters and didn’t want it to end. It’s about 12-year-old Amari Peters. She always gets judged at her school because of the neighborhood she lives in and what she looks like. Her older brother has disappeared and after Amari gets a strange suitcase, her brother’s mysterious job turns out to be in a magic world right in front of our eyes. Amari dives into a fantastical world full of magic and supernatural beings to find her brother but unfortunately it turns out her powers are seen as “illegal” and “evil” in this world and she has to face judgement once again. You have to be interested now! I am so excited for Book Two to come out! 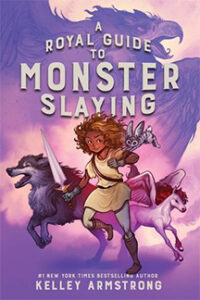 A Royal Guide to Monster Slaying by Kelley Armstrong, with illustrations by Xavière Daumarie, is about a 12-year-old girl named Rowan who is destined to be queen. She actually wants to be the royal monster hunter but that role was given to her twin brother Rhydd, who wants to be king. Even though they both want to trade, they are twins, and the royal tradition is that the oldest sibling takes the throne and the youngest takes the ebony sword and becomes the royal monster hunter, and since Rowan was born two minutes earlier, she is technically the oldest. Stuck in his royal role, Rhydd goes on a trip as a royal monster hunter in training to observe a mission to slay a gryphon. Rowan is worried for her brother and after going on a tiny little adventure on her own, she catches up to her brother and aunt. The mission to slay a gryphon gets seriously out of control. There are tragic accidents and in the end Rowan and Rhydd have to switch roles, but not under circumstances they like. Even though Rowan is now the official monster hunter, her uncle wants the throne for himself and his children, so he and the rest of the council send Rowan on an impossible journey to be trained and kill a Gryphon. This royal, magic world is so crazy and interesting, with  all the different monsters along with the kingdom and Rowan’s royal duties. It is quite the adventure—and the first of a trilogy! Also, Rowan is such an empowering young Black girl #blackgirlmagic 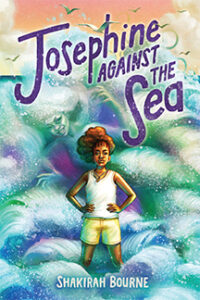 Josephine Against the Sea by Shakirah Bourne is a very adventurous fantasy. There’s mystery and action and it takes place in the Caribbean! So, we get a tropical fantasy escape. How amazing is that? It’s about 10-year-old Josephine who loves playing cricket and lives with her dad. Her mom passed away and whenever her dad comes home with a new “friend,” Josephine always finds a way to scare them away. One day, this new girlfriend named Mariss comes to their house but no matter what Josephine does, the lady doesn’t go away. Mariss is different; she’s strange and seems to take control over everyone she meets, including Josephine’s dad. After several crazy incidents Josephine starts to think that Mariss isn’t human. This book actually takes place in Barbados which is where the author and my dad are from. We get to learn about some Barbadian mythology and go on an adventure with crazy brave Josephine! Josephine is so cool and she cares about her friends and family so much. When I tell you that Josephine is one of the greatest examples of character development I’ve read, I’m not lying. 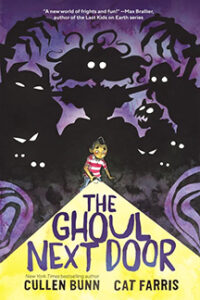 The Ghoul Next Door by Cullen Bunn, illustrated by Cat Farris, is a creepy graphic novel that is, of course, a fantasy. This book is about young Grey. One day on Grey’s way to school he takes a shortcut through a graveyard and drops his school project into a strange hole. Soon after, he finds a copy of his project at his house, along with many more strange gifts made out of human bones and hair. Soon Grey meets his creepy admirer who turns out to be a corpse-eating ghoul named Lavinia. After a crazy incident with his best friend Marshall, Grey gets into a huge mess with the monsters and creatures of the undead world. The ghouls and the creatures in this book are so cool and interesting! The best part is when we get to actually see the underworld, and since it’s a graphic novel we get to see all the details of it. 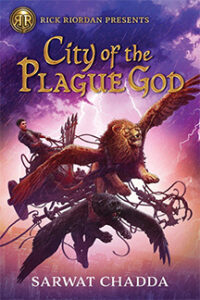 Last, but certainly not least, is City of the Plague God by Sarwat Chadda. This book stars 13-year-old Sikander, or Sik for short. He’s a Muslim kid of Iraqi immigrant parents living in Manhattan in New York and dealing with the death of his brother. One day, a few gross demons crash in and they are looking for something they think SIk has. Luckily, he is saved by a mysterious girl. Soon after, New York itself starts to rot and it’s up to Sikander to save everyone, even if it means mixing it up with the gods, myths, and legends of ancient Mesopotamia. I LOVE learning about different mythologies so this was such a nice treat. All the gods and magical creatures were just so . . .  AWESOME!!! This book had so much magic and fantasy but don’t read it while you eat!

I hope that at least one of these five incredible fantasy books interests you and that you can find the pleasure of diving into a fantasy world you haven’t already explored. Thank you so much for reading and if you want more book recommendations you can follow me @ainarasbookshelf on Instagram. Thank you, BYE. 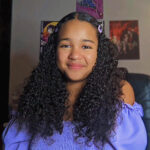 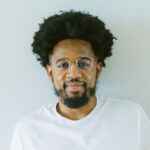 Ainara is a middle grade student and the author of book reviews on Instagram at @ainarasbookshelf.

Gary Gray Jr. is a member of the NCTE Build Your Stack Committee. He taught internationally for eight years before deciding to write full time in 2021. He enjoys storytelling, original glazed donuts, sneakers, and traveling with his wife. He has an MEd in early elementary pedagogy, with a focus on culturally responsive education. Gary is from Preston, Nova Scotia, Canada, the largest Indigenous Black community in Canada.