Celebrating the Library of Congress! - NCTE
Back to Blog 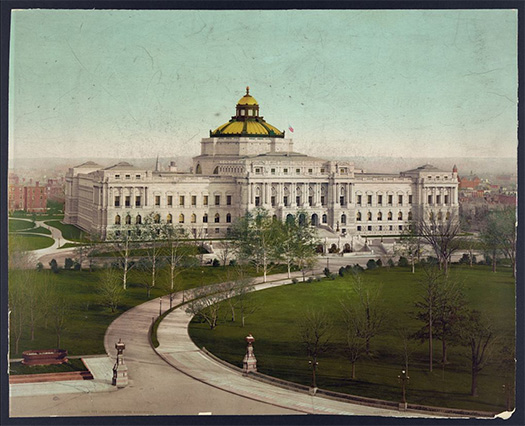 On this day in 1800, Congress approved the purchase of books to start the Library of Congress! On April 24 of that year, President John Adams approved the appropriation of $5,000 for the purchase of “such books as may be necessary for the use of congress.” In today’s economy, that amount would be the equivalent to over $114,000. Currently, the Library of Congress operates with a $719.4 million budget appropriation and the additional authority to spend $55.7 million in offsetting receipts.

The books, the first purchased for the Library of Congress, were ordered from London and arrived in 1801. The collection of 740 volumes and three maps was stored in the US Capitol, the Library’s first home. On January 26, 1802, President Thomas Jefferson approved the first legislation that defined the role and functions of this new institution. On August 24, 1814, British troops burned the Capitol building (where the Library was then housed) and destroyed the Library’s core collection of 3,000 volumes. On January 30, 1815, Congress approved the purchase of Thomas Jefferson’s personal library of 6,487 books for $23,950.

Today, the Library of Congress occupies three buildings on Capitol Hill. The Thomas Jefferson Building (1897) is the original separate Library of Congress building. The John Adams Building was built in 1938 and the James Madison Memorial Building was completed in 1981. Other facilities include the High Density Storage Facility (2002) at Fort Meade, Maryland, and the Packard Campus for Audio Visual Conservation (2007) in Culpeper, Virginia.

The Library of Congress is the country’s oldest cultural institution and is also the largest library in the world. Today’s collection of more than 171 million items includes more than 40 million cataloged books and other print materials in 470 languages; more than 74 million manuscripts; the largest rare book collection in North America; and the world’s largest collection of legal materials, films, maps, sheet music and sound recordings. On an average workday, the library receives approximately 15,000 items and adds approximately 10,000 of these to its collections. The vast majority of works in the library’s collections are received through the copyright deposit process.

Librarian of Congress Ainsworth Rand Spofford (1864–97) was the first to propose that the library be moved to a dedicated building. He also was instrumental in establishing the copyright law of 1870, which placed the Copyright Office in the Library of Congress and required anyone seeking a copyright to provide two copies of the work—books, pamphlets, maps, photographs, music, and prints—to the library.

In the early 1990s, the Library embarked on a program to make its incomparable collections more widely available to the public on the internet. The site also provides access to Library exhibitions, catalog data, legislative information at Congress.gov and copyright information at Copyright.gov. With more than 86.1 million visits and 482.5 million page-views in a given year, the site is among the most visited of all federal web addresses.

The Library of Congress has a number of resources that can be used in the classroom and with students:

NCTE is thrilled to be part of the Teaching with Primary Sources program and we are offering a a free professional learning opportunity tied to that work. Learn more and register here.