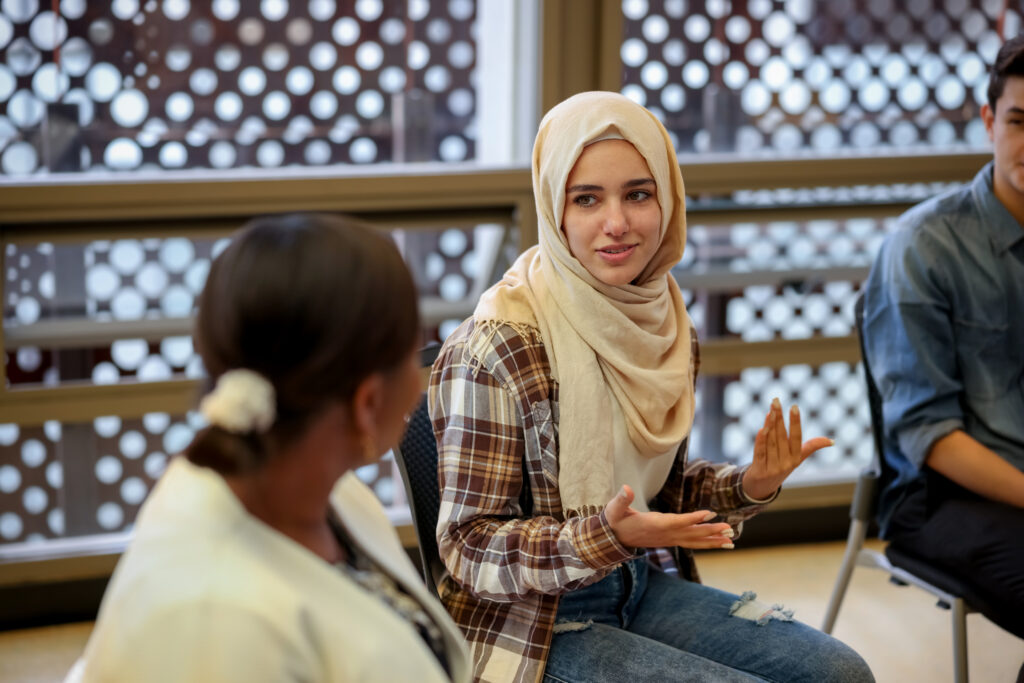 Soon the anniversary of the 9/11 attacks from 2001 will be commemorated again both in and out of schools. Year after year, the tragedy of 9/11 is taught in schools across America on that day. Although children in school today were not alive to witness this tragedy, they are immersed in conversations that often demonize all Arabs and Muslims. Thus, Arab and Muslim children are still feeling the deep-rooted impacts of 9/11 in all spaces, including schools. It is essential to address how 9/11’s impacts exacerbated anti-Arab and anti-Islamic sentiments in the United States, creating pathways to reinforce and advance Muslim stereotypes as well as anti-Islamic sentiments in societies and schools. In collaboration, politicians, reporters, and educators through school curricula have created a direct link between the 9/11 attacks and Islam, heightening anti-Islamic sentiments as a part of the ethos of our country (Ahmad & Szpara, 2003). The result is the birth of hostile environments for Arabs, Muslims, and those perceived to be so (Ahmad & Szpara, 2003; Bajaj et al., 2016).

Muslim, Arab, and Brown youth have become normalized targets of bullying since 9/11, magnifying the need for adults and educators to actively work to reverse these impacts (Bajaj et al., 2016). President Trump’s issuance of Executive Order No. 13769 in January 2017 banned seven countries with majority Muslim populations from entering the United States. Arab Muslims have been a target in the United States for decades, and the President’s support of anti-Islamic sentiment amplified negative stereotypes. This, along with other post-9/11 laws that were passed, such as the Patriot Act, worked to alienate Arab and Muslim populations, siloing them and creating a perception that their identities are in direct conflict with their American intersections (Whitehead et al., 2019). Banks (2017) refers to Arabs as “perpetual foreigners” in the United States despite how many generations of their family existed in America. How does this translate into the classroom? One of the most common comments reiterated to Arabs and Muslims, especially hijabi women and girls, is “go back to your country.” I always found that to be jarring since I hold no other citizenship besides my American passport. Born and raised in Brooklyn, could I be any more American?

Many educators who have not had authentic interactions with Arab and Muslim communities but have been immersed in a singular narrative hold many of these similar beliefs. After all, even educators were immersed in the same single narratives and have not done the work to deconstruct the falsehoods in order to reconstruct new understandings. The impacts of anti-Islamic sentiments on Muslim and Arab students play a significant role in public schools (Ahmad & Szpara, 2003). According to interviews conducted by Ahmad and Szpara (2003), Muslim students believed that negative stereotypes about Islamic values are pervasive in public schools, and feel the direct impacts of them through the promotion of hostile environments directly affecting their academic performance and feelings of inclusion and belonging (Jaber, 2022; Whitehead et al. 2019). For many students this has translated into a need for them to assimilate, giving up any of their cultural and religious identity markers in order to survive their contexts (Jaber, 2022; Schlein & Chan, 2010).

Given the exponential growth of Arab and Muslim communities in the United States in the last twenty years, it is integral to understand the invisibility of these subgroups, the impacts of their misrepresented identities, and how that causes them to become hypervisible when they are bullied (Pew Research Center, 2020). This is especially worthy of conversation since the Arab identity and subgroup is often missing from conversations in spaces priding themselves on equity work, a misstep often attributed to the fact that they are considered white on the census, deeming them invisible when it comes to conversations about meeting their particular needs, ESSA ratings, and special funding, among other things (Jaber, 2022).

In the midst of another 9/11 commemoration, I am writing this blog post as a call to action for teachers across the country. Do not fall into the trope of commemorating a tragedy for all Americans by perpetuating harm on your Arab and Muslim students. September 11 was a tragedy for our communities, too. If we are not teaching it as a single story, it becomes imperative for teachers to also talk about how 9/11 was used to normalize aggression against Arab and Muslim bodies both in the United States and abroad, desensitizing people under the banner of anti-terrorist action or the need to keep America safe. I say this as the mother of a young sophomore who was asked by her English teacher to apologize to the class for 9/11, in a school where over forty percent of the students look like her. In schools across the country, Arab and Muslim students are made to feel smaller through this conversation and others like it when curriculum is constantly misrepresenting their identities (Jaber, 2022). The birth of the Patriot Act and the acceptance of the general American people of the violation of our constitutional rights should be taught alongside the impacts of 9/11 if we are not teaching it as a single story. The representation of the extremist act of violence as a religious war against America, Muslims against everyone else, must also be taught. The deep-rooted impact felt by my daughter and innumerable other Arab and Muslim students in schools across the country, and how this has impacted their identities, birthing a sense of duality to survive schools and feign inclusiveness, must also be discussed. (Jaber, 2019).

Intentions are not equity

Currently, cultural responsiveness has become a weaponized term in schools across the country, where approximately 36 states have enacted anti-CRT bans disabling teachers from doing equity work in transformative ways. Historically, teachers attempting to be culturally responsive to Arab and Muslim students have used The Kite Runner by Khaled Hosseini to create mirrors for Arab and Muslim students, and windows for others to understand the Arab and Muslim lived experiences. However, this representation–or misrepresentation, rather—is damaging for a variety of reasons.

Many educators conflate Arabs and Muslims as being synonymous. Although they can overlap, they are not, in fact, the same. Muslims follow the faith of Islam and can come from anywhere; it is an identity of faith, not a geographical place. Arabs are people who originate from 22 Arab-speaking countries and are followers of multiple faiths. Many Arabs are Muslim, but not all Muslims are Arab, just like not all Arabs are Muslim. Afghanistan is not an Arab country; therefore, The Kite Runner is not a mirror for Arab students, nor a window or sliding door for other students to learn about the Islamic faith nor the Arab culture and experiences. The experience of the protagonist in the novel is fueled by an extremist Muslim regime and not by the beautiful faith of Islam in its true form. Islam in the novel is misrepresented, modeling much of the representation in mainstream media. Therefore, the novel is not a mirror for Muslim students either.

The Kite Runner is problematic because it is representative of a single story perpetuated by Western media that is meant to amplify fear of Arab and Muslim identities, normalizing aggression against them in spaces and institutions like schools. Research indicates that one in three Arab students and students with Arab-like physical identifiers were bullied by a teacher (Bajaj et al., 2016). This number is alarming since it is not taking into account the bullying students face by their peers as well as the fact that teachers are the ones responsible for creating inclusive spaces for all students.

What else can be done?

What we fail to see as we weaponize equity work is that the interest of all Americans converges when equity work is done with fidelity and transformatively. Would we have to worry about shootings in schools or other public places if every student in our schools felt included and seen? What if every student appreciated and understood the lived experiences of diverse people they shared space with? Would we have to watch the murder of another Black man if critical conversations to dismantle these stereotypes were happening in classrooms across our country, facilitated by teachers who believed in the transformative power of American classrooms?

Providing brave spaces for all students is integral to make all students feel included and to build self-advocacy and civic-engagement skills. We cannot claim to be inclusive or equitable if we are not meeting the needs of all students, including our Arab American students.

I had the privilege of working with a group of scholars and university and curriculum experts on a curriculum that helps teachers understand and teach 9/11 more holistically. This project was led by Penn Graduate School of Education and is rich with resources: Teaching beyond September 11. 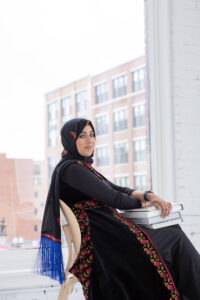 Dr. Sawsan Jaber is a global educator, presenter, equity strategist, and keynote speaker of 20+ years. She has held a variety of leadership positions both in the US and abroad. Jaber is currently a high school English teacher at East Leyden High School in Franklin Park, IL. In that role she also serves on the district’s Equity and Leadership Committee. Jaber founded Education Unfiltered Consulting and works with schools both nationally and internationally. She focuses on curriculum mapping, strategic planning, custom tailoring a social justice curriculum for schools, and anti-bias training. She completed her PhD with a focus on inclusion and belonging of students from marginalized communities. Jaber is a Board Director of Our Voice Alliance (OVA), charged with amplifying the voices of teachers of color to create more equity for students of color. Additionally, she is one of the founders of the Arab American Education Network (AAEN). She is a member of the International Society for Technology in Education professional learning network (ISTE PLN). Jaber is a National Board Certified teacher and focuses most of her research on engaging students in equity work and advocating for Arab and Muslim students. Among other projects, she is currently working on national and international equity-centered projects with Google and the National Board Association. Jaber has been featured in several conferences and podcasts, and written several blog, journal, and newsletter publications with the hopes to continue working with educators to empower students to work toward global equity and justice. She is excited to be in the process of publishing her first co-written book, Teaching in Precarious School Contexts. She can be reached via email or on Twitter.