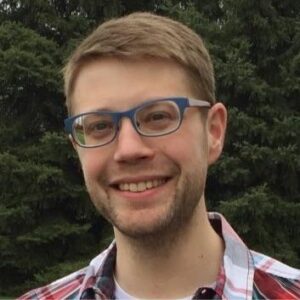 Ryan Schey is an assistant professor of English education in the Department of Curriculum and Teaching at Auburn University. He received his PhD in adolescent, community, and postsecondary literacies from the Ohio State University in 2018. Before that, he taught high school English, co-advised his school’s Genders & Sexualities Alliance for seven years, and served as his local teacher union’s co-president during several of these years. His research explores literacy and language practices and social change in schools, focusing on queer youth and those who work in solidarity with them. Currently, he is collaborating with K–12 educators in small-town and rural schools in Alabama with the goal of fostering classrooms that are more just, affirming, and humanizing for queer youth and families. Schey’s dissertation was recognized by the Queer Studies Special Interest Group of AERA, receiving the Dissertation of the Year Award for 2019. He recently coauthored the book Stepping Up! Teachers Advocating for Sexual and Gender Diversity in Schools with Mollie V. Blackburn, Caroline T. Clark, and members of a central Ohio teacher inquiry group, and his latest scholarship can be found in Teachers College Record, Research in the Teaching of English, English Education, and the Journal of Literacy Research.

Eligibility:
Established in 1970; given by the NCTE Standing Committee on Research, the Promising Researcher Award Competition is open to individuals who have completed dissertations within the approximately two years immediately preceding the award year (for the 2021 award year, between December 1, 2018, and January 31, 2021).

Studies entered into competition should be related to the teaching of English or the language arts, e.g., language development, literature, composition, teacher education/professional development, linguistics, etc., and should have employed a recognized research approach, e.g., historical, ethnographic, interpretive, experimental, etc. In recognition of the fact that the field has changed in recent years, the Committee on Research invites entries from a variety of scholarly perspectives.

Candidates must submit a manuscript based on their original research. Manuscripts should be written in a format, style, and length appropriate for submission to a research journal such as Research in the Teaching of English, College Composition and Communication, Curriculum Inquiry, Teaching and Teacher Education, or Anthropology and Education. Manuscripts range normally between 25-50 double-spaced, typewritten pages (table, figures, references, and appendices are considered part of the “manuscript”).

Although manuscripts should conform to the publication standard of the above-mentioned journals, selection for the Promising Researcher Award does not guarantee eventual publication in those journals.

Manuscripts submitted for the competition may be unpublished, under consideration or accepted for publication at, or already published in a research journal, so long as they are formatted for blind submission, without reference to publication status, and follow the other manuscript preparation requirements below.

Manuscript Preparation:
Manuscripts must take the form of self-contained research articles prepared for blind, peer-reviewed submission. Research in any other form (abstract, dissertation report) or format (reprint, published article) cannot be considered in this competition.

All manuscripts must have at least 1″ margins at the top, bottom, and both sides and must be double-spaced and in standard (12″) Times New Roman or Arial font. Applicants should prepare a manuscript with all author references removed from the document and file name for a blind, peer-review process. If the article has been published in a research journal, any formatting or other references to the article’s publication status should also be removed.

Applicants should also include a separate cover sheet with title and author information. The name, current address, position, and telephone number of the entrant should be transmitted along with the manuscript to facilitate communication between the selection committee and the entrant. This information should be on the cover sheet only.

Accompanying all manuscripts must be a written statement verifying that the research was completed within the specified completion dates. This signed, original letter must come from someone other than the candidate (e.g., the major professor or a researcher knowledgeable in the field), who is sponsoring the candidate.

Award Submission:
Manuscripts, including cover sheets and verification letters, should be sent as three separate Word attachments, in one email, to Sarah Miller, smiller@ncte.org by 11:59 p.m. Eastern Time, March 1.

Judging:
Manuscripts received on or before March 1, will be transmitted to members of the selection committee for evaluation. Results of the judging will be available after June 15. Entrants will be notified of the results shortly thereafter. Manuscripts will not be returned to authors.

Award:
The award recipient will receive a complimentary NCTE Annual Convention registration, a certificate, an award announcement in NCTE’s journals, a one-year NCTE membership, and a one-year subscription to Research in the Teaching of English (RTE).

2017
Lamar Johnson, Michigan State University, East Lansing, “Where Do We Go From Here?: Toward a Critical Race English Education”

Victoria Haviland, University of Michigan, “Things Get Glossed Over”: Rearticulating the Silencing Power of Whiteness in Education.”
2006-Finalist
Beth Lewis Samuelson, Ph.D., Central Michigan University, “Ventriloquation in discussions of student writing.”
2005
Mary Juzwik, Michigan State University, “Narrative performance in teaching as a rhetoric of identification: A stylistic analysis of parallelism in “Violence was the way to go”.

Aria Razfar, Whittier College, “Repair: A Practice of Language Ideologies in English Language Learner Classrooms”
2003
There were no winners for 2003
2002
Jill Heinrich, University of Iowa, “Boys’ Talk: Mediating Masculinity in the English Classroom.”

Su-Yueh Wu, University of Georgia, Athens, “The Influence of Collectivism and Individualism on Argumentative Writing by Chinese and North Americans”

Lawrence R. Sipe, University of Pennsylvania, Philadelphia, “The Construction of Literary Understandings by First and Second Graders in Response to Picture Storybook Readalouds”
1997
Susi Long, University of South Carolina, Columbia, “Learning to Get Along: Language and Literacy in a New Cultural Setting”
1996
Cynthia Lewis, Grinnell College, Iowa, “The Social Drama of Literature Discussions in a Fifth/Sixth-Grade Classroom”

Peggy Trump Loofbourrow, Castro Valley, California, “Composition in the Context of the CAP: A Case Study of the Influences of the California Assessment Program on the Life of One Junior High School”
1990
John M. Ackerman, University of Utah, “Reading, Writing, and Knowledge: The Role of Disciplinary Knowledge in Comprehension and Composing”

William Sweigart, Indiana University Southeast, New Albany, “Classroom Talk as It Affects Process and Product in Writing”
1989
Melanie Sperling, University of California, Berkeley, “I Want to Talk to Each of You: Collaboration and the Teacher-Student Writing Conference”

Sandra Jean Wilde, University of North Carolina at Charlotte, “An Analysis of the Development of Spelling and Punctuation in Selected Third- and Fourth- Grade Children”
1986
Lucille McCarthy, Loyola College, Baltimore, Maryland, “A Stranger in Strange Lands: An Ethnographic Study of a College Student Writing in Two Academic Contexts”

Glynda A. Hull, University of Pittsburgh, “The Editing Process in Writing: A Performance Study of Experts and Novices”
1984
Deborah Brandt, University of Wisconsin-Madison, “Writer, Context, and Text”

Nancy T. Sommers, University of Oklahoma, “Revision in the Composing Process: A Case Study of Experienced Writers and Student Writers”

Marion Crowhurst, Brandon University, Manitoba, Canada, “The Effect of Audience and Mode of Discourse on the Syntactic Complexity of the Writing of Sixth and Tenth Graders”

Charlotte T. Smith, Livermore School District, California, “The Relationship Between the Type of Questions, Stimuli, and the Oral Language Production of Children” (Research in the Teaching of English, Fall 1977, pp. 111–116)
1974
Arthur N. Applebee, Tarleton High School, Lancashire, England, “The Spectator Role: Theoretical and Developmental Studies of Ideas about and Responses to Literature, with Special Reference to Four Age Levels”

Donald H. Graves, University of New Hampshire, Durham, “Children’s Writing: Research Directions and Hypotheses Based Upon an Examination of the Writing Processes of Seven-Year-Old Children”

Carol Sager, Wilmington Public Schools, Wilmington, Massachusetts, “Improving the Quality of Written Composition through Pupil Use of a Rating Scale”

Ann Terry, University of Nebraska, “A National Survey of Children’s Poetry Preferences in the Fourth, Fifth, and Sixth Grades”
1972
John A. Black, Darien High School, Darien, Connecticut, “The Effect of Instruction in General Semantics on Ethnic Prejudice as Expressed in Measurements of Social Distance, Ethnocentrism, and Authoritarianism”

Stephen M. Koziol, Jr., University of Pittsburgh, Pennsylvania, “An Analysis of the Development of Noun Plural Rules in the Primary Grades”

John B. Lum, Rockefeller Foundation, California, “An Effectiveness Study of English as a Second Language (ESL) and Chinese Bilingual Methods”

Frank O’Hare, Florida State University, Tallahassee, “The Effect of Sentence-Combining Practice Not Dependent on Formal Knowledge of a Grammar on the Writing of Seventh Graders”

Bryant P. Fillion, University of Illinois, “Rhetoric as Symbolic Action: An Explication of Kenneth Burke’s Theory of Rhetoric and Its Implications for the Teaching of Rhetoric in Secondary Schools”

Julie M. Jensen, University of Texas, Austin, “A Comparative Investigation of the Casual and Careful Oral Language Styles of Average and Superior Fifth-Grade Boys and Girls”