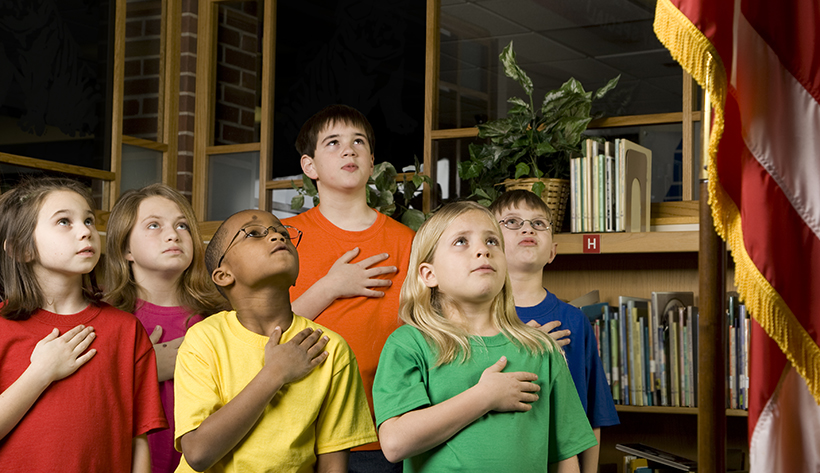 This post was written by NCTE member Kelly Sassi.

At a recent NCTE online member gathering, Alfredo Celedón Luján was the guest, presenting on the power of language. He began by inviting the group to think back to their elementary school years and then write the words to the Pledge of Allegiance in that voice. Some people wrote, “And to the republic for witches stand” or “one nation, invisible.”

I thought of my son, who was seven years old when we moved to Fargo, North Dakota. On his first day in school, a day when he was already very nervous about being “the new kid,” his teacher said, “Let’s say the Pledge of Allegiance.” My son remembered thinking, “What is that?” The teacher then said, “Let’s have our new student lead the pledge.” My son froze up. He mumbled, “I don’t know it.” The teacher pointed to the words written on the bulletin board and my son began to recite, feeling very nervous, as he wasn’t sure of the meaning behind the words.

This is not an uncommon feeling. In “Allegiance to Gratitude,” Robin Wall Kimmerer’s chapter in Braiding Sweetgrass: Indigenous Wisdom, Scientific Knowledge, and the Teachings of Plants, she writes, “The pledge was a puzzlement to me, as I’m sure it is to most students. I had no earthly idea what a republic was, and was none too sure about God, either. And you didn’t have to be an eight-year-old Indian to know that ‘liberty and justice for all’ was a questionable premise” (p.106).

At the NCTE member gathering, as teachers shared out about their experiences with the Pledge of Allegiance as children, it soon became clear that underneath the veneer of a set of words spoken in unity, there were many sources of conflict.

A couple of teachers recounted student (mis)behavior during the recitation of the Pledge, questioning whether students who claimed to be “protesting” really knew what they were objecting to. I witnessed such behavior when I taught high school English in Alaska, and I remembered Gerald Graff’s call to “teach the conflicts” (Beyond the Culture Wars: How Teaching the Conflicts Can Revitalize American Education) so I invited my students to study the issue and write an argument advancing their stance on the recitation of the Pledge.

Reading through that set of essays was an education for me. My students had myriad stances on the issue, some I had not considered, such as the legal history of efforts to make recitation of the Pledge mandatory. They provided interesting sources of evidence, along with passionate commentary connecting evidence to their claims.

What if, instead, I had pursued disciplinary action for those students not conforming to saying the Pledge? How might that year of learning have unfolded differently? Matt Herman, an instructor at Stone Tribal College, has a corollary to Graff’s call: “If we choose not to teach the conflicts, the conflicts will teach us” (“NA/AI Literature and Its Tribal College Reception.” Modern Language Association Annual Conference. Philadelphia, 2005). And that lesson would likely have been more painful than what I learned from my student essays.

Saying the Pledge of Allegiance in unison is powerful, but also problematic. I am drawn back to Kimmerer’s chapter and her explication of the Thanksgiving Address that starts and ends her child’s week (instead of the Pledge), “a river of words as old as the people themselves, known more accurately in the Onondaga language as the Words That Come Before All Else” (p. 107).

The Address is a series of expressions of gratitude to everything on earth—the land, the water, the animals, and more, including teachers: “We gather our minds to greet and thank the enlightened Teachers who have come to help throughout the ages. When we forget how to live in harmony, they remind us of the way we were instructed to live as people. With one mind, we send greetings and thanks to these caring Teachers. Now our minds are one” (p. 114). The Address is a “credo of gratitude” that unites people in respect for everything on earth.

As we ended the Zoom meeting, I was left sifting through the many thoughts that educators had about the Pledge and about the power of language. We are at a moment, after the January 6th attack on the Capitol, when our country is in desperate need of healing and unity, but instead of using a rote recitation to unite us, we have an opportunity and a responsibility as educators to courageously teach the conflicts.

What we really have in common as a country is our commitment to this process—identifying a conflict, exploring the multiple perspectives on the issue, listening deeply, being open to changing our stance as we encounter new pieces of evidence, and respecting each other. Being American is not about this or that way of saying the Pledge, but being willing to engage in these critical conversations all while discovering and developing the power of language.

Our professional organization, NCTE, has a lesson plan on this very topic by Dawn Hogue and the National Writing Project’s College, Career and Community Writers Program has a rich (and growing) set of resources that help teachers and students move beyond pro/con thinking and explore the complexities of our conflicts. (View a unit plan on the Pledge of Allegiance.) 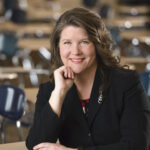 Kelly Sassi is a professor of English and education at North Dakota State University and director of the Red River Valley Writing Project. She studies preparation of English teachers, writing assessment, and Native American literatures, language, and culture.

View the archived recording of the NCTE Member Gathering with Alfredo Celedon Lujan.