Intersectionality and Confluence: Frameworks for Decolonizing Your Classroom - NCTE
Back to Blog 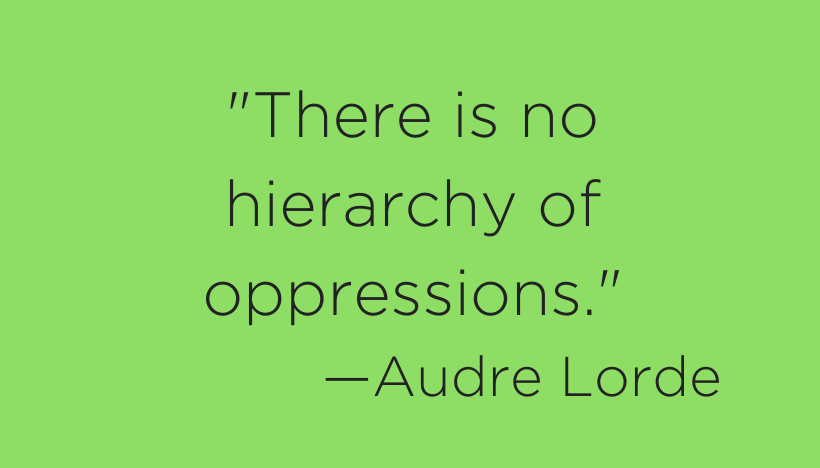 This post was written by NCTE Member Michael Seward, who is also a member of the Standing Committee on Global Citizenship.

“There is no hierarchy of oppressions.”  —Audre Lorde

As a committee member, I am concerned about oppression in all its iterations. How might we, as educators, I wonder, dismantle oppression? How might we decolonize our classrooms? Recently, I came across an interview that explores approaches for “building a just and equitable society.” The article encourages readers to move beyond identity politics (described as a “promotion of tokenized personalities [. . . that] revolves around empty partisan placards and exclusive single-issue platforms”) by embracing intersectionality. That identity politics should be presented as divisive and counterproductive rang true; that intersectionality should be proposed as a model for envisioning and embodying modes of acting in the world that allow us to form “inclusive alliances meant to stimulate fundamental change” did not surprise me.

Yet as I read the article, I found myself getting stuck. My problem was not the core concept of Kimberlè Crenshaw’s term intersectionality, which Crenshaw defines as “a metaphor for understanding the multiple ways that forms of inequality or disadvantage sometimes compound themselves.” That gender, race, class, able-ism, transphobia, homophobia, and other forces of oppression might coalesce as they marginalize makes sense. The confusion I was facing had more to do with the metaphors at play and the theoretical frameworks enabled by those metaphors than with the notion of compounded impact.

How might the metaphor of intersectionality, like the notion of identity politics, be limiting the imaginations of those working for social justice? Intersectionality conjures an image of a singular point on a grid — a dot formed where one line crosses another. Where, for example, does the gender line cross the race line? Like identity politics, the term intersectionality focuses on an individual and a static nexus of aspects of identity. Recognizing that my imagination does not do full service to Crenshaw’s crucial insights, I nonetheless struggle: How can I decolonize my classroom if I focus on individual students and where they fall along a line? The metaphor of intersectionality wasn’t providing me the framework I desire.

Might confluence be a more beneficial metaphor? Rather than imagining human beings as immobile dots along set lines, confluence allows me to envision people (students) as agents trying to swim the waters of social contexts, to navigate multiple currents that compel them in specific directions: toward the center (where the power is) or toward a margin. The same forces that center some students push others to the edges. Each agent within any given social context is acted upon by multiple currents, some merging (to increase flow in the same direction) and some countering each other (to slow or negate flow).

The metaphor of confluence allows me to see colonization as playing itself out along myriad channels. In addition to race, class, and gender as social forces, we might recognize religion, age, education, even attractiveness, as currents involved in any social setting.

Importantly, confluence allows us to envision oppression as being dynamic. As a metaphor, confluence focuses our attention not on individuals, but on the forces that envelop them. Confluence allows us to recognize that currents flow differently in different social contexts. The force that centers me in one context might marginalize me in another. The current that sweeps me powerfully in one context might simply nudge me gently in another.  In some contexts, race might be the strongest current in determining my placement; in other contexts, gender might take precedence. By placing emphasis on the social context, the metaphor of confluence might also allow me to complicate the notion of the margins. Each social context takes a unique shape. While some might be envisioned as perfect circles with a clear center and all margins being equidistant from that center, others might be recognized as having blob shapes, perhaps like starfish; in such contexts, some of those on the margins are closer to the center than others. Thus, the confluence metaphor allows me to explore and discuss important differences in social contexts. Instead of inducing me to voice where I, for example, as a cis, white, queer man locate my static position along a continuum, confluence allows me to recognize that, while my identity does not change, my position does. Confluence  permits me to ask which of the social forces (e.g., transphobia, race, sexuality, and gender) are at play in any given social context, and how those forces influence my position.

Crucially, this metaphor also allows me to envision my students as human beings actively navigating social contexts. Rather than focusing on individuals and their set identities, I can focus on social forces. Instead of fearing and doubting power, I can understand that power is inevitable and necessary for change (as there is no social space without a center of power). I can work with students to alter the social forces at play, so that those forces empower students and move them toward the center. Importantly, I can recognize that the forces that center will need constant attention, that students and I will need perpetually to work on the shape of the social context of the classroom — as well as on the social dynamics present — so that the center of power is constantly moving, with an ongoing shape-shifting that enables individuals from different groups to be centered (empowered) at different times.

The metaphor of confluence might enable us to envision anew (thus, to subvert and resist) the oppressive legacy of global colonization that manifests itself daily in our classrooms. The obstacles facing our students are not inherent to the students (it is not they who need to be changed); rather, the obstacles facing students result from the forces that are acting upon them in the contexts in which they find themselves. Our job as educators is to change those forces and the shape of those contexts — not our students.

If you are interested in participating in the discussion around the metaphors, frameworks, tools, and approaches we might envision and leverage as we strive to decolonize our classrooms, I encourage you to attend a workshop that fellow members of the Standing Committee on Global Citizenship and I will be presenting at the NCTE Annual Convention in Anaheim this November.

For more than 30 years, Michael Seward has been teaching a variety of subjects at various levels, from eighth grade to post-graduate. He has been involved in global education in a number of capacities (including two Fulbright teaching exchanges) and countries (including England, Germany, Slovakia, Costa Rica and Poland). Currently, he teaches English at Minneapolis College.

The Standing Committee on Global Citizenship works to identify and address issues of broad concern to NCTE members interested in promoting global citizenship and connections across global contexts within the council and within members’ teaching contexts.